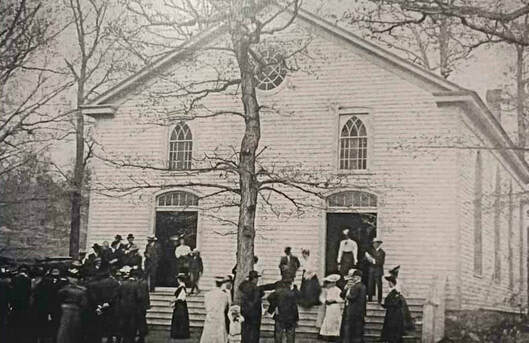 History & Building
That portion of the beautiful Shenandoah Valley that lies within the bounds of Mt. Horeb Presbyterian Church was settled by Scotch-Irish Presbyterians. Of primary concern to these intrepid pioneers was their attendance at divine services and for many years these men and women journeyed to Augusta Stone Presbyterian Church that they might worship Almighty God and receive the blessings of Christian worship and fellowship with others of their persuasion. As time passed a need was felt for a church in their more immediate vicinity and we find in the first Session Book of Mt. Horeb Church this account of the establishment of our Church, written by the Rev. William Brown, pastor of the Augusta Stone Church. The following is an excerpt from this account:

Origin of the Church of Mt. Horeb
“That portion of the congregation of Augusta Church residing in the vicinity of Weyers Cave had long felt the inconvenience of their remoteness from their house of worship. But it was not until the summer of 1855 that it was deemed practicable to take measures for their accommodations. The building was erected in the summer of 1856 and was dedicated to the worship of God, August 21, 1856, at which time divine services were continued for some days, conducted by Rev. John H. Babcock of Harrisonburg, Charles S. M. See of Tinkling Springs, and William Brown of Augusta.”

After a suitable meeting house had been obtained, a petition, signed by forty people living in the vicinity of Mt. Meridian, was presented to Presbytery, meeting at Tinkling Springs Presbyterian Church on November 20, 1856. The petition, with its forty signers, appears here as it is found in the minutes of Presbytery:

Petition of Presbytery
“The undersigned, residents of South and Middle River, in the vicinity of Mt. Meridian, living at such a distance from any church that, at all seasons of the year, it is difficult, and in the inclement season of the year, clearly impossible to enjoy the ministrations of the gospel in any Presbyterian church; and having erected a commodious and comfortable house of worship in a situation convenient to us, hereby petition Presbytery to organize a distinct and separate church in the house aforementioned.

In this movement your petitioners disavow any disaffection toward any church with which they have at any time been connected, and aver that their sole purpose is to meet an urgent and increasing demand for more Presbyterian preaching in our neighborhood than they can enjoy elsewhere. They wish their children and families to enjoy the benefits of Sabbath School instruction, and to be reared under Presbyterian influence and thereby to escape the dangers of proselyting efforts which other denominations are making to win them away from the faith of their fathers and your petitions, as in duty bound, will ever pray.”
​The following is a list of the petitioners, many of whom are the ancestors of some of our present day members:​​​


Following the petition we find this note in the Presbytery minutes, “A subscription for the support of a minister, amounting to $321.00 was presented, as an indication of the ability of the subscribers. A motion to grant the request was laid on the table.”

In the “Origin of Mt. Horeb Church” written by the Rev. William Brown, he states that Presbytery, upon receiving the petition, appointed a committee consisting of the Rev. Joseph B. Wilson of Staunton, father of the late President Woodrow Wilson, Rev. William T. Richardson of Waynesboro, and David Gilkerson, ruling elder from Tinkling Springs, to visit the field and report at the spring meeting of Presbytery.

At the meeting of Presbytery held at Collierstown on April 9, 1857, this committee made a report recommending that the prayers of the petitioners be granted; whereupon the Rev. Wm. Brown, Rev. William T. Richardson and ruling elders John Trimble and Wm. A. Bell of the church in Staunton were appointed a committee to organize the church.

James A. Patterson and James W. Crawford were elected to the office of ruling elder at this first meeting. Mr. Crawford had held this office at Augusta Stone Church. Mr. James A. Patterson was the first elder to be ordained in our church and served faithfully until his death on August 7, 1892.

The church began to function immediately and the first meeting of the Session was held on August 11, 1857 for the purpose of appointing delegates to Presbytery. Mr. James A. Patterson was appointed as our first delegate to Presbytery and Mr. Crawford served as Clerk of the Session.

According to Session records, the first Communion service was held on November 30, 1857, conducted by the Rev. C. S. M. See and John W. Good. We can imagine with what joy the members joined together at the Lord’s table in their new church.

On January 26, 1858, Mrs. Caroline T. Crawford presented herself before the Session as a candidate for church membership and became the first person to be received into the membership of the church on profession of her faith in the Lord Jesus Christ.

Mary Elizabeth, infant daughter of James A. Patterson and his wife, Mary, was the first child to receive the rite of baptism in Mt. Horeb church on April 16, 1858. As Mrs. Charles D. Crawford, she will be remembered by many of our older members.

We find during these early years in the history of our church a steady growth in membership and a faithful concern for the church, but it was not until ten years after its organization that the members were able to have a full-time minister. During these first ten years visiting ministers carried on the preaching of the gospel.

Summary of the Years Following
The sanctuary was erected on land donated by the Ewing family and dedicated to the worship of God on August 21, 1856. The fellowship hall and kitchen were added in 1954 and the offices and two new Sunday School rooms were added in 1979. Also, the original Sunday School rooms were enlarged by removing some walls. In 1996 a handicapped rest room was added and the women’s rest rooms were remodeled. The manse was built in 1867 on land given by James W. and Carolina Crawford. It was extensively remodeled in 1972 with funds from Miss Sarah Patterson’s bequest. Until the 1880’s Sunday School was held only during the spring and summers due to the hardships of travel and the difficulties encountered in heating the church building. Today our Sunday School classes meet year round in a well planned and well equipped facility.

Church Fire
In the early morning hours of March 28, 2002 a fire broke out in the pulpit area of the sanctuary. Fourteen fire departments from surrounding communities responded. The fire destroyed the sanctuary and education wing. The church office and fellowship hall suffered water and smoke damage but were repaired for use.

A new facility was constructed and upon completion was dedicated,  June 26, 2005. It included a new sanctuary, fellowship hall, parlor, and youth and choir rooms. The original fellowship hall was then converted to an education wing having six classrooms. The facility, costing 2.5 million dollars became debt free in May 2008 and a note-burning service was held during the homecoming worship service in July.